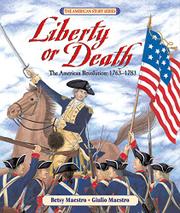 The Maestros continue their “American Story” series with a lucid, opinionated account of the American Revolution, from the end of the French and Indian Wars to George Washington’s resignation as Commander-in-Chief. Though the small figures in Guilio’s illustrations give the events he depicts a certain distance, Betsy’s narrative more than compensates, with lines like “Throughout the fall and winter, Greene and Cornwallis chased each other’s tails,” and pointed bashing of a Continental Congress that repeatedly dragged its feet when it came to keeping its army supplied. Standing out from similar histories for its inclusion of less familiar figures—William Dawes, who rode with Paul Revere; John Glover, whose boats saved Washington’s bacon during the Battle of Long Island; banker Haym Salomon, and others—along with appended discussions of the contributions of blacks, women and Native Americans to the struggle, this merits a place alongside Benson Bobrick’s more dramatically illustrated Fight For Freedom: The American Revolutionary War (2004). (Nonfiction. 8-10)