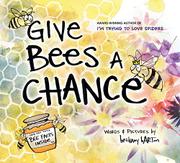 GIVE BEES A CHANCE

Following much the same format as in I’m Trying to Love Spiders (2015), Barton makes a strong case for the value of bees.

Edgar, a torpedo-shaped white kid with googly eyes and a scribble of hair, loves everything the narrator does, including dinosaurs, strawberries, and honey, but he’s not so sure about bees. The narrator proceeds to persuade him to “give bees a chance,” telling him there are “about 25,000 different kinds of bees to love” (a sampling of which are introduced on front and rear endpapers), describing the composition of a honeybee colony and honeybee anatomy, and regaling him with cool bee facts. Edgar’s still not sure, because, he says, “they’re all gonna sting me!” Since many readers likely share Edgar’s apprehension, Barton’s counter to this is delightfully kidcentric: “most bees lose their stinger after attacking,” she says, “which would be like your hand disappearing if you pinched your sister!” Edgar remains unconvinced, so Barton drills down on the importance of bee pollination to the world’s food supply, illustrating it with a strawberry plant that says, “throw me some pollen! I don’t have arms.” Barton’s digital mix of scribbly cartoons and comics-style panels, splashy, watercolor-effect backgrounds, and exuberant hand-lettering makes for a high-energy celebration of all things Apis.

Even the most bee-phobic readers will have a hard time resisting this swarm of humor and fact.