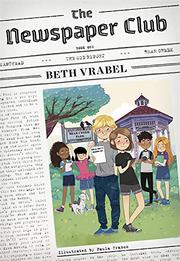 From the Newspaper Club series, volume 1

Eleven-year-old Nellie’s investigative reporting leads her to solve a mystery, start a newspaper, and learn key lessons about growing up.

Nellie’s voice is frank and often funny—and always full of information about newspapers. She tells readers of the first meeting of her newspaper club and then says, “But maybe I’m burying the lede…what Dad calls it when a reporter puts the most interesting part…in the middle or toward the end.” (This and other journalism vocabulary is formally defined in a closing glossary.) She backtracks to earlier that summer, when she and her mother were newly moved into a house next to her mother’s best friend in rural Bear Creek, Maine. Nellie explains that the newspaper that employed both of her parents in “the city” had folded soon after her father left for business in Asia. When Bear Creek Park gets closed due to mysterious, petty crimes, Nellie feels compelled to investigate. She feels closest to her dad when on the park’s swings, and she is more comfortable interviewing adults than befriending peers. Getting to know a plethora of characters through Nellie’s eyes is as much fun as watching Nellie blossom. Although astute readers will have guessed the park’s vandalizers, they are rewarded by observing Nellie’s fact-checking process. A late revelation about Nellie’s father does not significantly detract from this fully realized story of a young girl adjusting admirably to new circumstances. Nellie and her mother present white; secondary characters are diverse.