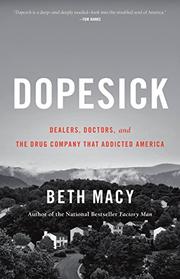 Dealers, Doctors, and the Drug Company that Addicted America

Harrowing travels through the land of the hypermedicated, courtesy of hopelessness, poverty, and large pharmaceutical companies.

A huge number of Americans, many of them poor rural whites, have died in the last couple of decades of what one Princeton researcher has called “diseases of despair,” including alcoholism, suicide, and drug overdoses caused by the hopeless sense that there’s a lack of anything better to do. Roanoke-based investigative journalist Macy (Truevine: Two Brothers, a Kidnapping, and a Mother’s Quest: A True Story of the Jim Crow South, 2016, etc.) locates one key killer—the opioid epidemic—in the heart of Appalachia and other out-of-the-way places dependent on outmoded industries, bypassed economically and culturally, and without any political power to speak of, “hollows and towns and fishing villages where the nearest rehab facility was likely to be hours from home.” Prisons are much closer. Macy’s purview centers on the I-81 corridor that runs along the Appalachians from eastern Tennessee north, where opioid abuse first rose to epidemic levels. She establishes a bleak pattern of high school football stars and good students who are caught in a spiral: They suffer some pain, receive prescriptions for powerful medications thanks to a pharmaceutical industry with powerful lobbying and sales arms (“If a doctor was already prescribing lots of Percocet and Vicodin, a rep was sent out to deliver a pitch about OxyContin’s potency and longer-lasting action”), and often wind up dead or in jail, broke and broken by a system that is easy to game. Interestingly, Macy adds, “almost to a person, the addicted twentysomethings I met had taken attention-deficit medication as children.” Following her survey of the devastation wrought in the coal and Rust belts, the author concludes with a call to arms for a “New Deal for the Drug Addicted,” a constituency that it’s all too easy to write off even as their number climbs.

An urgent, eye-opening look at a problem that promises to grow much worse in the face of inaction and indifference.