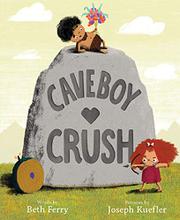 Neander is a “typical caveboy,” whether he’s chasing giant mammoth butterflies or spending time with his beloved pet rock, Rock. Then he spots Neanne, a short and hairy—thus, “perfect”—cavegirl. After a little grinning and groaning, which his parents correctly diagnose as symptoms of a “crush,” a smitten Neander runs off to court the elusive cavegirl. He first heads to the Field of Bees to snatch some flowers. In front of Neanne, Neander plops down the flowers and then…CRUSH! He obliterates the flowers. An unimpressed Neanne dashes away, leaving behind a disappointed Neander. It’s time for a “grander” plan. Next up is the Waves of Salt, where Neander scoops out a massive conch shell. He struts back to Neanne, deposits his offering beside her house, and then…CRUSH! Unsurprisingly, Neander’s attempts at romance are not successful, but half the fun of the story comes from his efforts to impress his eventual new friend. Though the premise relies on traditional gender roles to a disappointing degree, Ferry’s joyful, plucky words practically guarantee exciting storytimes. Bolstered by Kuefler’s smooth, colorfully sparse pictures, Neander and Neanne’s story—a mini-saga between two bushy-haired, light-skinned prehistoric children—delivers belly laughs amid mild twists and enormous fun.

From CRUSH to AWW.