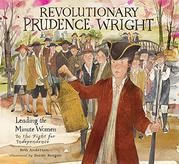 Leading the Minute Women in the Fight for Independence

From the time she was a young girl, Prudence Wright “had a spark of independence.”

The story begins with a brief recounting of various ways young Prudence defied traditional gender roles while growing up in Pepperell, Massachusetts Colony, including outperforming boys at school, hunting, fishing, and debating her brothers on political issues. As she grows older, Prudence fumes at King George III’s increasingly punitive laws, which include onerous taxes on British goods. In 1773, when the men of Pepperell vote to join the Colony’s resistance to British rule and begin training in militias, Prudence and the women in her quilting circle stage their own rebellion by dumping British tea into a bonfire on the town common and boycotting other British goods. As King George clamps down on protests, the colonists declare war. While most of Pepperell’s men are away fighting in skirmishes, Prudence discovers that Tory spies are planning to infiltrate the town and organizes the townswomen to defend it. She leads the lasses—armed and dressed in men’s clothing—in a dramatic ambush on Pepperell’s bridge, making revolutionary history as head of “the first-ever unit of minute women.” Reagan’s accomplished illustrations, executed in watercolor with digital drawing, add historical veracity to Anderson’s superbly documented, at times hair-raising narrative. The author explicitly situates Wright and her female comrades as pioneers who “proved themselves as full citizens” in an era before female enfranchisement. Most characters are White, but a few of the colonists present as people of color.