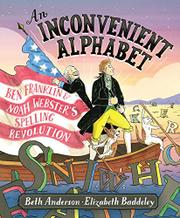 Two Founding Fathers team up for their own miniature revolution—to simplify and standardize American English.

Printer Ben Franklin couldn’t stand inconsistent spelling. He wanted to invent some new and remove some old letters to create a phonetic alphabet. Noah Webster also couldn’t stand our inconsistent alphabet. He wanted to create a guide to grammar and pronunciation. Both wanted to change the way that Americans used English: “Using twenty-six letters to write forty-four sounds caused nothing but trouble.” The two visionaries teamed up to tackle the problem of the “inconvenient alphabet,” crafting a new alphabet—one in which letters matched sounds and sounds matched letters. When this idea failed to gain widespread support, Webster came up with new plans, this time to revolutionize spelling. His plans for seemingly simpler spellings were also rejected by the populace, leading Webster to create his best-known work: his dictionary. Both Anderson’s text and Baddeley’s illustrations are energetic and compelling. The latter playfully elucidate examples of the linguistic nuances discussed, showing (for instance) Webster and Franklin manually taking silent letters out of words such as “walk” and “knock.” The majority of illustrated figures are white, although a variety of skin tones are presented in each group illustration.