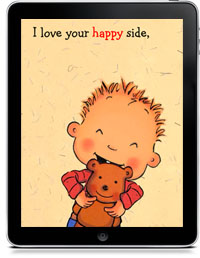 I LOVE YOU THROUGH AND THROUGH


Based on the 2005 board book, this Scholastic "Touch and Tilt" app retains the print version's sweetness and soothing tone. Told in simple, declarative rhymes ("I love your fingers / and toes / your ears / and nose"), the story is illustrated by images of a young boy and his adored teddy bear in various situations and emotional states. Adding to the mix, the iPad version features brief animations and sound on each page—one for the boy and one for the teddy bear when each are tapped. There are also animations activated by tilting the iPad clockwise and counter-clockwise, typically making the duo sway to and fro. The tilting animations sometimes get in the way of the touch animations, creating a delayed-reaction effect that may cause some frustration for its target toddler audience. Not every animated illustration works, stylistically; it's doubtful any fans of the book were clamoring to see the gentle bear do a headspin, for instance. But the app features calm narration, tinkling background music and illustrations so soft and fluffy they could be confused for high-thread-count bedding. Even the two-touch/two-tilt animations per page are reassuringly consistent. It's practically a sleeping aid in story app form. That's no knock; it's just fine for parents of restless readers at bedtime. (iPad storybook app. 18 mo.-5)