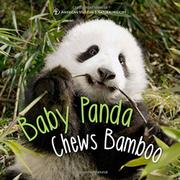 From the First Discoveries series

A panda cub’s childhood documented with photographs and a simple text.

This latest addition to the First Discoveries series from the American Museum of Natural History offers irresistible images of young panda cubs, from the helpless, pinkish newborn to independence a few months after the first birthday. Like earlier series titles about penguins, wolves, and dolphins, this is essentially an album of photographs culled from varied sources and strung together in a chronological text that follows the animal as it grows up. Each double-page spread has one or several photographs, accompanied by a paragraph or two of relatively simple text describing the cub’s behavior—in particular, its feeding habits. Readers and listeners will come away with important information about pandas, but it is the close-up photographs that steal the show. Although the animals pictured are likely different, they look alike; readers will probably assume they are following a single animal’s journey, especially since information about the images is limited to a list of credits on the copyright page. The book concludes with a message from “the expert,” Angelo Soto-Centeno, a bat specialist at the museum.

An obvious choice for animal-focused storytimes, but it’s no match for the baby animal titles by wildlife photographer Suzi Eszterhas, which do focus on specific animals.