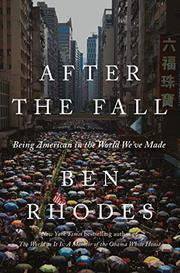 Being American in the World We've Made

A former Obama administration adviser examines the slow fall from grace that led to Trump.

The assumption that America was somehow different from the rest of the world was an article of faith in his childhood, writes Rhodes. “In the span of just thirty years, this assumption would come crashing down,” he adds, undermined by the very thing that had heralded greatness: a robust capitalism that produced global inequality, undermined the working class, and encouraged official corruption. “To be an American in 2020 was to live in a country diminished in the world,” he writes. With that diminution, other nations rose: Putin’s Russia, but especially Xi Jinping’s China. “In Singapore,” writes Rhodes, who traveled the world to write this book, “a senior government official told me casually over drinks that Asia had moved on from America—speaking as if this gleaming capitalist construction had almost been seamlessly handed off to the Chinese.” Meanwhile, other global leaders behaved like Trump—notably Hungary’s Viktor Orbán, who was once an anti-communist liberal but found more opportunities to exercise power as a nationalist, quietly suppressing opposition while keeping the beer flowing. “Perhaps this was how fascists got away with it through history…there’s enough normal life out there for people to grab on to,” Rhodes writes. Even in the surveillance state of China, this holds true, at least for ethnic Chinese—and, notes the author, Trump is said to have approved of Xi’s program of concentration camps for dissident Uighurs. The author clearly shows that fear and self-censorship work in the U.S. as well as anywhere in the world. As for the pandemic and Trump’s failings there, the U.S. emerges as “a country that killed hundreds of thousands of people through our own unique blend of incompetence and irrationality,” no model for anyone. It’s a stinging, and entirely well-founded, rebuke of a political strain that shows no signs of disappearing.

A powerful synthesis of recent world history that should disabuse readers of any notion of American exceptionalism.