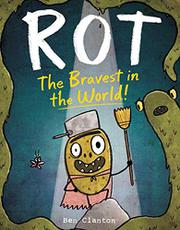 ROT, THE BRAVEST IN THE WORLD!

A “scaredy-spud” puts on his brave face.

All “mutant potatoes” love mud. Mud is good for playing games, eating, and even sleeping. But few taters have more tender feelings toward muck than Rot. À la Pete the Cat, Rot celebrates mud in song: “Mud between my toes! / Mud in my nose! / Mud is GREAT / wherever it GOES!” When Rot’s big brother, Snot, tells Rot about the Squirm that lives “deep down in the mushy muck,” his love quickly turns to fear. But he doesn’t give up! Instead, Rot imagines himself in various disguises to work up courage. There’s “Super Spud” (a superhero), “Sir Super Rot, the Brave and Bold” (a superhero-knight), and even “Sir Super Rot the Pigtato” (a, um, superhero-knight-pig-potato). The disguises are one thing, but, deep down, is Rot really brave enough to face the Squirm? Readers wooed by Rot’s charm in Rot: The Cutest in the World (2017) will laugh out loud at this well-paced encore—and it’s not just because of the butt cracks. Clanton creates a winning dynamic, balancing Rot’s earnestness, witty dialogue, and an omniscient, slightly melodramatic narrator. The cartoon illustrations were created using watercolors, colored pencils, digital collage, and—brilliantly—potato stamps. Clanton’s reliance on earth tones makes for some clever, surprising page turns when the palette is broken.