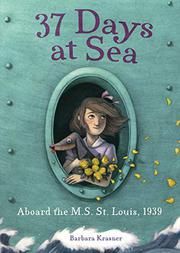 An 11-year-old refugee just wants to start fresh in the United States after her flight from Nazi Germany on the St. Louis.

Ruthie Arons misses her dog, her grandmother, and her home in Breslau. But her family’s been ordered to leave Germany, so Ruthie and her parents are America-bound. On the St. Louis, all passengers are European Jewish refugees, and the crew are White Germans. Although it’s 1939, many of the crew are not Nazis, and the captain tries to make things as decent for the passengers as he can. The free-verse chapters recounting Ruthie’s journey vary in quality; many read like prose broken into short lines, filler between more artfully crafted poems. They’re most successful when they focus tightly on Ruthie: the pranks she and her friend play on the passengers and crew or the surreal vision of refugees fleeing on a cruise liner complete with a pool, shuffleboard, and movies. Less successful are the poems peppered with true details from the tragic voyage of the real St. Louis—a ship that the United States, disgracefully, turned back to Europe, where nearly a third of the passengers were murdered by Nazis. Ruthie is not very interested with these adult events and thus describes them without context, background, or emotional punch.