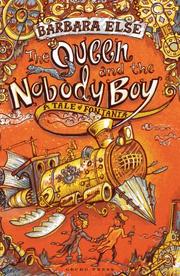 THE QUEEN AND THE NOBODY BOY

From the Tales of Fontania series, volume 2

by Barbara Else ; illustrated by Sam Broad

Else gathers a pile of well-seasoned fantasy kindling but fails to light it up in this uninspired sequel to the effervescent The Traveling Restaurant (2012).

An infant in the opener but now 12, Queen Sibilla of Fontania impulsively disguises herself as a boy and runs away with disaffected odd-jobs boy Hodie. Chaperoned by an unusually helpful squirrel and former pirate/cook Cpl. Murgott, the two land in the subterranean capital of Um’binnia just as its blustering emperor, Prowdd’hon, declares war on Fontania. Meanwhile, the land’s magnificent Dragon-eagles are being captured or dying, and with them will disappear all magic unless certain lost Ties are recovered and used in some unspecified way. Else also tucks in colorful elements, from flying passenger trains and giant poisonous Ocean Toads to bumbling Um’binnian rebels led by a woman (also in male disguise). Despite these small pleasures, her plot is too driven by conveniently overheard conversations and dependably timely distractions or rescues to develop any real suspense. Moreover, the cast is made up of the usual stock suspects, and as a point-of-view character, Hodie makes a cold fish—sullen, inarticulate and only briefly moved by meeting his long-missing (aristocratic, natch) mother or, later, seeing the devoted servant who had raised him as a son murdered before his eyes.

That death is the only surprise in this routine bildungsroman.