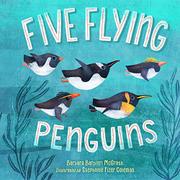 Five little penguins shoot the breeze—until a seal arrives to eat them.

As the quintet sit “on the ice… / The first one [says], ‘Today feels very nice!’ ” Cue the counting as the second and third penguins make their own rhythmic and rhyming observations about the weather. But the fourth and fifth penguins have something else on their minds: the seal that wants them “for a meal!” The penguins dive into the water, making a huge splash as they “swim, swim, swim” and “[fly] through the sea.” When they’ve “lost the seal at last” (as the third penguin opines), they rise up for air and find the seal trailing after them. Rather than a grim final page turn, the book ends as the “sneaky, silly seal” tags one of the penguins to be “it.” In a nice twist on the counting-book formula, all five penguins are a different species. Though these species are not labeled, they appear to be king, macaroni, gentoo, chinstrap, and rockhopper penguins—all of which actually can live in the same Antarctic region. However, that a seal—a natural predator of the penguin—would play tag breaks with scientific consistency. Coleman’s digital illustrations are set in cool tones, making the orange of the penguins’ beaks pop against the frigid backgrounds. Careful readers will notice the seal approaching in every picture.

Not a must—but a cool one to share with young penguin fans.