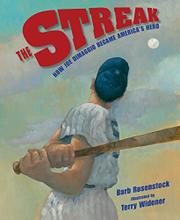 Joe DiMaggio’s 56-game hitting streak is considered one of the greatest feats in baseball and the one least likely to be replicated.

Everyone expected Joltin’ Joe to pound out the hits, but as the consecutive games mounted up, the excitement built as well. The year 1941 was a difficult time, and people needed something to cheer about. “That one perfect summer” was the last summer of peacetime. All eyes were on DiMaggio each time he came to bat, and newspaper headlines screamed the daily tally. Rosenstock’s game descriptions capture the momentum and let readers see and feel the events as if they were at the games. Along with play-by-play for some of the key hits, there’s some fascinating information about DiMaggio’s proud and determined character, as well as some lesser-known events. His favorite bat, “Betsy Ann,” was stolen during the streak, later recovered and then broken. Widener’s expansive, double-page illustrations, rendered in acrylic on bristol paper, in earth tones of green and gold, are larger than life, elongating DiMaggio as he takes his stance, rounds the bases or grips his bat. Each occurrence of the hit count and the word “streak” stands out from the rest of the text in heavy red display type.

DiMaggio’s remarkable hitting streak is freshly presented for a new generation of fans.