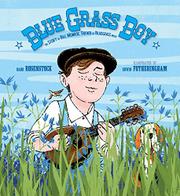 The Story of Bill Monroe, Father of Bluegrass Music

This picture book is both a biography of Bill Monroe and a history of bluegrass music, the genre he was instrumental in creating.

While Monroe’s childhood was beset with struggle—having crossed eyes and losing his mother at age 10—there were also times of great joy, such as the jamborees on the front porch of the family home. Singing and playing music brought comfort to young Bill. As an adolescent he played mandolin at country dances with his uncle Pen. Later, he moved to Chicago and played in a band with his brothers, all the while collecting the sounds of the various genres he encountered in the city. Text and illustrations both make note of the influence African-American musicians had on Monroe during this time; however, the lack of acknowledgement of the segregated conditions of both the music industry and Monroe’s home state of Kentucky is a missed opportunity to place his story within its historical context. Eventually, Monroe established his own band, taking the original yet familiar sounds of bluegrass all across the country. The book’s tone is nostalgic, with folksy narration and caricature-esque illustrations. Though this kitsch brings with it a certain appeal, it also unfortunately strips the book of the rugged emotion so characteristic of bluegrass music.

An adequate tribute to an Americana icon and his musical legacy.