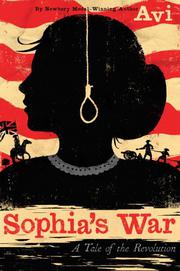 A Tale of the Revolution

During the American Revolution, Sophia becomes a spy for the patriots, but will she have the courage to relay vital information?

Despite the threatening beginning—Sophia witnesses Nathan Hale’s hanging—readers never doubt Sophia’s success because she shares her story in retrospect, lessening the tension. Instead, her “war” is internal: The man she ultimately exposes is John André, a British officer she adores. Descriptions of the British occupation of New York City and the horrific conditions for prisoners of war are shocking. Children will be morally outraged on Sophia’s behalf when her rebel brother dies in prison. Thus, they may find it difficult to empathize with Sophia’s passion for André, and all but the most romantically inclined may find Part One: 1776 (September 1776-January 1777), during which 12-year-old Sophia’s love blooms, slow-moving. Although Sophia feels betrayed when André does not help her brother and later, when at age 15 she begins to spy on André, is incensed that he does not recognize her, her feelings remain conflicted. Part Two: 1780 focuses on these experiences. The action picks up when Sophia travels north alone in an effort to thwart André’s collusion with Benedict Arnold. However, while readers will appreciate Sophia’s reluctance to condemn anyone to death, her melodramatic wavering over André becomes tiresome.

Recommend this to sentimental youngsters or as a supplemental text.