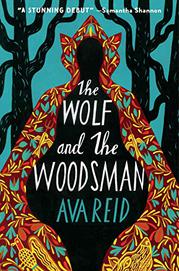 THE WOLF AND THE WOODSMAN

A young woman from a desolate village and a disgraced prince must join together to save the kingdom from the prince’s violent, religious zealot of a half brother in Reid’s debut fantasy.

Évike, the only woman in her pagan village without magical abilities, is shunned and bullied because the gods have chosen not to grace her with power. So when members of the king’s Holy Order of Woodsmen make the perilous journey through the forest to take a “seer,” a pagan woman with the power to see the future, Évike is offered up as a substitute. The King, who represents the dominant, monotheistic state religion called the Patrifaith, steals a pagan woman every year to use as a blood sacrifice. Rather than lose someone with the power to foresee ruined crops and other dangers, Évike’s village is happy to send her to die instead. But when all the Woodsmen except their captain are killed off by forest monsters, Évike learns he is no ordinary Woodsman but Prince Bárány Gáspár himself. Gáspár is desperate to give his father, the King, a magical edge to a war he is currently losing. Otherwise, Gáspár’s despotic brother, Nándor, will have the chance at a hostile takeover, and if Nándor is on the throne, everyone outside the Patrifaith is in serious danger. That includes not just Évike’s village, but other groups like the Yehuli, who follow a lightly fictionalized version of Judaism and include Évike’s long-lost father. There is an overreliance on simile in the prose, and sometimes the action gets muddled, but overall this is an impressive debut. Reid’s academic background in ethnonationalist religious history is used to great effect here, and she shows how folklore is bent and twisted to fit the dominant culture of the moment. Reid wades thoughtfully into thorny conversations about religious persecution, identity, and personal sacrifice.