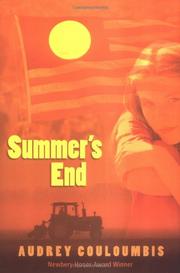 In the summer of 1965, Grace’s brother Collin is growing his hair long, reading Johnny Got His Gun and becoming involved in anti-war protests. When he torches his draft card, his father puts his belongings out on the front porch, effectively disowning him. Collin heads to Canada; his father wonders if he can hold up his head in town anymore; Grace’s mother is caught in the middle; and Grace’s primary concern is that her 13th birthday party won’t happen now. Couloumbis traces the ripple effects of Collin’s action throughout Grace’s extended family and expertly navigates the ebb and flow of family relationships in a time of stress. Grace’s journey from self-absorption to empathy is well drawn, as is the family drama in which each character changes in a realistic way, and hope proves to be made of “really tough stuff if it was still able to draw breath around here.” A strong Vietnam War–era and coming-of-age story. (Fiction. 11+)