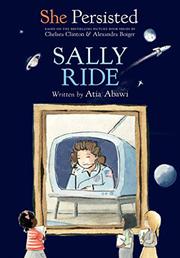 Sally Ride: from tennis-playing schoolgirl through astronaut and educator to entrepreneur.

Sally Ride stars in this entry to the chapter-book series spun off from Chelsea Clinton and Alexandra Boiger’s picture book She Persisted (2017). Long before she becomes the first woman to go to space, Sally is an athlete, a White girl born in California in 1951. She’s a tennis whiz but an inconsistent scholar, attending a prestigious private school on an athletic scholarship. Though the narrative a little ostentatiously tells readers that “Sally persisted,” the youth presented here—a child who rolls her eyes at boring teachers, a college student who drops out to play tennis, an excellent tennis player who “just did not enjoy” the effort of becoming a professional—shows the opposite. Sexism is alluded to, but no barriers are portrayed as blocking young Sally herself. Though her amazing achievements aren’t downplayed, the groundbreaking Sally Ride, in this telling, becomes simply someone who applied for a job and excelled once she liked what she was doing. Sally’s partner, Tam O’Shaughnessy, is mentioned as such, but the text avoids using any pronouns for O’Shaughnessy, which, along with her gender-neutral name, may leave many young readers ignorant that Ride silently broke sexuality barriers as well.

Despite choruses praising Ride’s persistence, her life is inexplicably portrayed as lacking struggle.