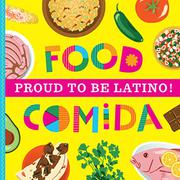 PROUD TO BE LATINO

A board-book introduction to the different foods of Latin America.

Attractive and colorful illustrations present foods from different Latin American countries alongside text that mentions differences and commonalities. Double-page spreads present the information in English on the left-hand side and Spanish on the right. Unfortunately, there is a mistake in the Spanish on almost every page. An article that does not match its noun: “un gran comida.” Nouns that do not match their adjectives: “papas fritos,” “algunas salsa.” Plain old proofreading mistakes: “hoja de lurel” (for “hoja de laurel”), “pasterlería” (for “pastelería”), “coco caliente” (presumably for “cocoa caliente,” which is more commonly known as “chocolate caliente” but in any event has nothing to do with coconuts). (The power of proofreading should never be underestimated.) Some might make readers laugh if they weren’t so awful: “la región de Andrés” for “la región andina.” And the final blow comes with the use of the word “Latino.” This term is a uniquely United States construct to refer to people from Latin America living in the United States. Cacao may have been used as currency on Latin American trade routes, but it was not used on “Latino trade routes.” Moreover, people are described by their demonyms, so Pablo Neruda is not a “Latino poet,” he is a Chilean poet.

It is hard to be “Proud to be Latino” when so many mistakes abound.