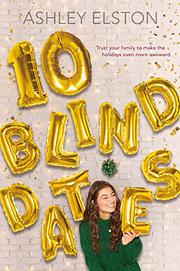 Is an exuberant extended family the cure for a breakup? Sophie is about to find out.

When Sophie unexpectedly breaks up with her boyfriend, she isn’t thrilled about spending the holidays at her grandparents’ house instead of with him. And when her grandmother forms a plan to distract Sophie from her broken heart—10 blind dates, each set up by different family members—she’s even less thrilled. Everyone gets involved with the matchmaking, even forming a betting pool on the success of each date. But will Sophie really find someone to fill the space left by her ex? Will her ex get wind of Sophie’s dating spree via social media and want them to get back together? Is that what she even wants anymore? This is a fun story of finding love, getting to know yourself, and getting to know your family. The pace is quick and light, though the characters are fairly shallow and occasionally feel interchangeable, especially with so many names involved. A Christmas tale, the plot is a fast-paced series of dinners, parties, and games, relayed in both narrative form and via texts, though the humor occasionally feels stiff and overwrought. The ending is satisfying, though largely unsurprising. Most characters default to white as members of Sophie’s Italian American extended family, although one of her cousins has a Filipina mother. One uncle is gay.