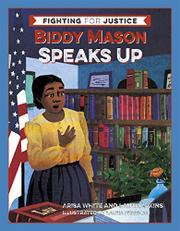 From the Fighting for Justice series

The true story of an enslaved woman finding freedom and creating a home and community.

This book is “a creative act of repairing the historical record, of imagining Biddy Mason’s life based on all the information and stories we could gather,” explain the co-authors in a preface. Scenes are written in free verse. Each poem is followed by information about Biddy’s world: slavery and midwifery, plantation life and economy, migration, the struggle for freedom, and life as a free black person. Born into slavery and separated from her mother, Biddy learns about healing plants from the woman who takes her in. She is later sold away and forced to migrate across the country. In Utah and then in California, where slavery is illegal, Biddy encounters Native people and free blacks. Instead of following her master to Texas, where slavery is legal, Biddy manages to resist in court and gain her freedom. Her story doesn’t end there. Her later life as a healer, homesteader, and community builder fills the last third of the book, ending on a note of hope. Poems are illustrated, and nonfiction sections include archival photographs, vocabulary words, timelines, and questions encouraging readers to reflect on their own lives. The cruelty of slavery, including brutal whippings and rape, is presented in the scenes and explained in the notes.

Difficult but necessary, inclusive and respectful, this book does a beautiful job of telling truths about our history and how we construct it.