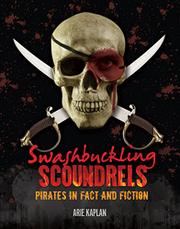 Pirates in Fact and Fiction

A slender but sweeping survey of piracy on the high seas: in real life, from ancient times to today; in legend and fiction, from Long John Silver to Capt. Jack Sparrow and Jacky Faber.

Kaplan opens with the now-customary reference to Pirates of the Caribbean—but then goes on to introduce real 17th-century freebooter Henry Avery, who retired wealthy and unpunished after a series of dramatic exploits. That pattern holds throughout, as accounts of the careers of high-profile buccaneers and less well-known but no less daring figures (not all of whom came to bad ends) alternate down through history and also in printed works, films, video games, and television. The author plays on the contrasting popular perceptions of pirates as both brutal criminals and “lovable antiheroes,” even to the extent of portraying today’s Somali pirates in a sympathetic light. A judicious selection of photos and period images adds visual color, sidebars cast glances on topics ranging from sea shanties to digital piracy, and starter lists of print and Web resources will get readers eager to dig into this popular topic underway.

Broad of beam for being so shallow of draft but seaworthy for all its distinctly romanticized picture.