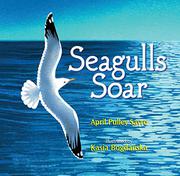 Ballad stanzas celebrate gulls who flourish both near and far from the sea.

Sayre, who has introduced all kinds of animals with clever rhymes and rhythms designed for reading aloud, turns to the gull family. While readers and listeners may know that gulls follow boats and frequent sandy shores, they may be surprised to learn that they fly into deserts, forage in garbage dumps, pursue plowing tractors and feeding whales, and use human-paved roads to open clams shells. After a series of action examples, one stanza to a spread, comes a change of pace, stretching out a reveal over a page turn: “Seagulls nest, / gather sticks. / Spotted eggs, then… // …spotted chicks!” The narrative pauses with a note about the curious way these birds move: “Left wing, left leg, / stretch as one.” With time, the chicks grow, fledge and become adults, circling “from ship to shore” all over again. While Sayre’s books are often illustrated with her own photographs, the choice not to try to photograph the confusing gull family is sensible. From the laughing gulls on the title page to the California gull on the final, dedication page, first-time picture-book illustrator Bogdańska’s digital images are reasonably recognizable (though never identified) and convey something of the range of gull appearances and the wide variety of their habitats. The backmatter adds additional interesting information about gulls’ feeding habits, their varied and varying plumage, and their common name.