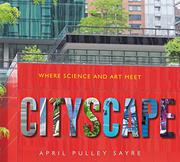 Where Science and Art Meet

An eclectic collection of photos of architecture is linked by simple rhymes in large type, highlighting the visual confluence of engineering and art.

A photo depicting electrical wires against a building with corrugated siding is accompanied by the text “Lines merge, / diverge, divide,” followed by “Science, math, art / live side by side” on the facing page, accompanying photos of a statue of a lion, a tiled wall, and a close-up of a grille of some sort. Similarly, curves, triangles, and other geometric elements are evoked in photos of skyscrapers, bridges, cranes, and sculpture. In places, the concept seems too advanced for the likely audience. “Structures transmit,” set against a photo of electrical transformers, is shown opposite the text “transport, / and power,” which accompanies four photos: of people riding a Vespa, a fire engine, an overhead view of a recreational kayaker, and a view of the U.S. Capitol with a school bus in the foreground. Readers will be understandably confused as they try to parse this sentence. Are the scooter, fire engine, and kayak to be read as “structures”? Is the picture of the Capitol dome a play on the word “power”? Most of the generic cityscape images seem to be of Chicago, with landmark structures from Machu Picchu, London, Paris, and other cities mixed in. A concluding spread contains questions for children to consider as they navigate cities.

A rare misfire from Sayre.