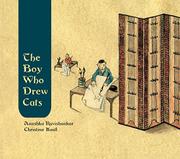 THE BOY WHO DREW CATS

This adaptation of an (relatively) oft-told tale features a conversational text paired with illustrations that echo the story’s Japanese origins.

Ravishankar uses a straightforward, colloquial tone to tell the story of a young boy whose single-minded obsession with drawing cats has unexpected results. While this youngest son is not described as weak or sickly as in some other versions (by Arthur A. Levine and Frederic Clement, 1994, and Margaret Hodges and Aki Sogabe, 2002, among others), he is equally useless to his family. Recognizing his lack of agricultural aptitude, Akiro’s parents take him to the local temple in hopes that he can be trained as a priest. When his behavior doesn’t change, he is sent away again. This time, Akiro chooses his destination—a large temple in a nearby village. Kastl’s spare paintings, outlined in pen and ink, appear on textured, sepia backgrounds meant to resemble rice paper. While some may feel that the characters’ features are simplified to the point of stereotype, the overall impression is of respectful representation rather than cartoonish caricature. The abrupt climax, the impact of which is heightened by the artist’s toothy and terrifying picture of the “gigantic goblin rat,” will be a surprise to those unfamiliar with the tale.

Storytellers, students of folklore and those who appreciate seeing the work of international children’s-book creators will all welcome this intriguing import.