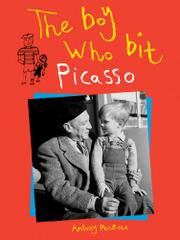 THE BOY WHO BIT PICASSO

“Picasso was great fun to play with. He liked to romp around on the floor and have pretend bullfights. His tweed jacket was nice and scratchy. He smelled good too. He smelled of cologne and French tobacco.”

To a set of seldom-seen photos taken by his mother, Lee Miller, interspersed with both pictures of roughly hewn toys and playful art created by Picasso and a page of drawings of the titular incident by modern children, Penrose adds appreciative comments and authentically sketchy childhood memories of a renowned family friend. Taken in France and England, the photos offer glimpses of the artist in his studio or posing with young Antony, along with shots of his own children, other friends such as George Braque and artwork done in a characteristic array of media and found materials. Images of colorful works from the author’s personal collection are added as well; the author's little Noah's Ark set appears juxtaposed to a tiny Picasso piece called Mrs. Noah, for instance. The text itself adds playful notes with variations in size and weight, along with occasional wavy lines and is set on solid backgrounds of pale blues, yellows, lilacs and other pastel hues.

Though certainly not a systematic overview of Picasso’s life and career, this intimate, child’s-eye view serves up a winning glimpse of the artist’s personality and unparalleled creative breadth.