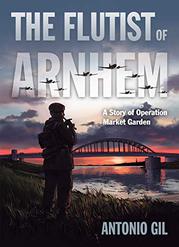 THE FLUTIST OF ARNHEM

A Story of Operation Market Garden

Gil's graphic novel provides a detailed look at a massive World War II operation, from the planning and logistics to the blood and guts required to see it through.

British spy John Hewson has gathered crucial intelligence that could help turn the tide of the war, but delivering it from behind enemy lines won’t be easy, even with the Nazis preoccupied by Operation Market Garden, an immense Allied effort to break the stalemate on the European front and bring the war to a close. Gil gives us pulse-pounding escapes from the Germans’ tightening noose, stealthy assassinations of enemy combatants, and explosive firefights that test a soldier’s mettle. He also gives us pages of dense exposition that situate the dramatic moments in the larger context of the war but also bring the narrative to a crawl as the reader slogs through panels plastered with text. The book presents itself as Hewson's story, but muddying that focus and robbing some personal moments of their punch are frequent shifts in perspective—from Hewson to the Germans chasing him to a company of British soldiers to Dwight D. Eisenhower himself, not to mention periodic jumps to omniscient narration that fill in backstory and detail troop movements and tactics. One wishes Gil could’ve woven the history and context more naturally into the narrative rather than inserting the recurring infodumps. The art is compellingly realistic, with excellent attention given to facial expressions and anatomy as well as to the machinery of war. The colors and lines have a thick, clumpy quality that, combined with the realism of the images, lends the work a digital, rotoscoped feel. The action is intense and the violence is brutal without being gory.

Unbalanced narrative but striking art—best for fans of minutiae.