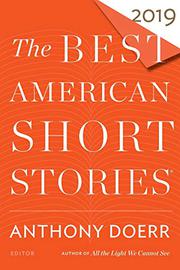 Latest installment of the long-running (since 1915, in fact) story anthology.

Helmed by a different editor each year (in 2018, it was Roxane Gay, and in 2017, Meg Wolitzer), the series now falls to fiction/memoir writer Doerr (All the Light We Cannot See, 2014, etc.) along with series editor Pitlor. A highlight is the opener, an assured work of post-apocalyptic fiction by young writer Nana Kwame Adjei-Brenyah that’s full of surprises for something in such a convention-governed genre: The apocalypse in question is rather vaguely environmental, and it makes Kazuo Ishiguro’s Never Let Me Go seem light and cheerful by contrast: “Jimmy was a shoelooker who cooked his head in a food zapper,” writes Adjei-Brenyah, each word carrying meaning in the mind of the 15-year-old narrator, who’s pretty clearly doomed. In Kathleen Alcott’s “Natural Light,” which follows, a young woman discovers a photograph of her mother in a “museum crowded with tourists.” Just what her mother is doing is something for the reader to wonder at, even as Alcott calmly goes on to reveal the fact that the mother is five years dead and the narrator lonely in the wake of a collapsed marriage, suggesting along the way that no one can ever really know another’s struggles; as the narrator’s father says of a secret enshrined in the image, “She never told you about that time in her life, and I believed that was her choice and her right.” In Nicole Krauss’ “Seeing Ershadi,” an Iranian movie actor means very different things to different dreamers, while Maria Reva’s lyrical “Letter of Apology” is a flawless distillation of life under totalitarianism that packs all the punch of a Kundera novel in the space of just a dozen-odd pages. If the collection has a theme, it might be mutual incomprehension, a theme ably worked by Weike Wang in her standout closing story, “Omakase,” centering on “one out of a billion or so Asian girl–white guy couples walking around on this earth.”

A fine celebration of the many guises a short story can take while still doing its essential work.