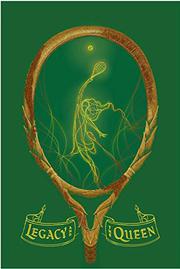 LEGACY AND THE QUEEN

From the Legacy series, volume 1

A 12-year-old girl living in a kingdom ruled by a mysterious queen dreams of attaining her sport’s highest prize.

Legacy Petrin lives and works in the financially strapped orphanage in the provinces run by her father and rises early every day to practice tennis with her old racket. After her best friend, Van, excitedly tells her about a scholarship competition for a spot at an esteemed academy and the opportunity to try out for the national championships, Legacy runs away to the city to compete. After winning, she learns there is still much she doesn’t know: The players are not just proficient in tennis, but also have magical skills that they use to their advantage. Legacy befriends Pippa, a knowledgeable girl from an elite tennis family, and acquires a builder, or coach, Javi. With Pippa and Javi at her side, Legacy makes her way through the competition, despite sabotage attempts, learning secrets about her own family along the way. Legacy is a strong character, and the secondary characters also have interesting backstories. The storyline is reminiscent of other dystopian stories, but centering tennis—with lively descriptions of matches that give a strong sense of the sport—is an unusual touch. Most characters are white, although Javi is brown-skinned, and some other characters of color are mentioned.

Magic, tennis action, and family secrets are woven into an original coming-of-age tale.