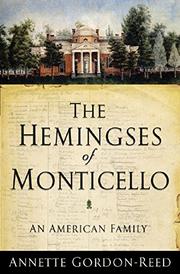 THE HEMINGSES OF MONTICELLO

The unusual history of an enslaved family whose destiny was shaped over the course of four decades by Thomas Jefferson.

Gordon-Reed (Law/New York Law School, History/Rutgers Univ.; Thomas Jefferson and Sally Hemings, 1997, etc.) grudgingly comes to a sympathetic view of Jefferson, who inherited the mixed-race Hemings family when he married Martha Wayles Skelton in 1772. By 1784, he was a widower living in Paris as head of the American commission, accompanied by manservant James Hemings, whom Jefferson took along so he could receive training as a French chef. In 1787, James’s 14-year-old sister Sally came to Paris with Jefferson’s daughter Polly; sometime during the French sojourn, she became her master’s mistress. Back in Virginia, Jefferson installed Sally in a fairly pampered life at Monticello; he sired her numerous children and emancipated them upon his death in 1826. The author painstakingly sifts through the evidence about their relationship and examines the convoluted attitudes that influenced Jefferson’s behavior. Sally’s white father was also Martha Jefferson’s father; Jefferson’s wife and his slave mistress were half-sisters who owed their radically different destinies to the Anglo-Virginian system of bondage. The colonists had adopted the Roman rule partus sequitur ventrem (you were what your mother was) rather than the English rule (you were what your father was). By the perverse logic of this system, any drop of white blood ameliorated the work slaves were assigned and their chances of being freed. Jefferson encouraged James Hemings and his brother Robert to learn skills and to move freely in the world. There is no clue in the life of this intertwined family that Gordon-Reed does not minutely examine for its most subtle significance. She concludes that Jefferson was above all a most private man, who espoused abhorrent racial theories in public but behaved relatively well (by the standards of the era) toward his own slaves.

Ponderous but sagacious and ultimately rewarding.