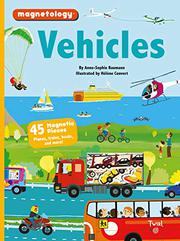 by Anne-Sophie Baumann ; illustrated by Hélène Convert ; translated by Wendeline A. Hardenberg

Dozens of different vehicles can be set to work or recreational use on a set of magnetized land- or seascapes.

Packaged on punch-out plastic sheets stashed in an attached storage envelope, the 45 vehicles in this French import—from Soyuz and Ariane rockets to a horse-drawn cart—are identified in a visual key at the end. Most are ridden, driven, or otherwise supervised (except for the pilots of the drone and a remote-control submarine, who go unseen) by an actively posed cast that’s diverse in both age and race. Baumann supplies a sparse assortment of banal observations (“With an inflatable raft, people can enjoy floating and relaxing on the water”) scattered over each of the five spacious and largely empty air, land, or water scenes on which the vehicles can be distributed. Like Ines Adams’ Ocean, illustrated by Oliver Latyk (2018), and other titles in the Magnetology series, the plethora of small magnetized pieces offers plenty of opportunity for recognition and play (not to mention treasure hunts, as they will readily scatter). Though not strong enough to hold items on a refrigerator, they will adhere to the sturdy backdrops well enough to stay in place even when the pages are held vertically.

An interactive alternative to the many other galleries of conveyances winged, wheeled, or afloat.