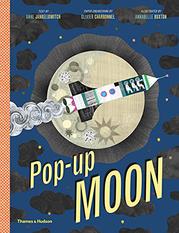 A lunar flyby, with notes on our largest satellite’s origins, phases, and tidal effects enhanced by pop-ups.

As in its predecessor, Pop-Up Earth (2021), paper engineer Charbonnel’s 3-D constructs are showstoppers that make the narrative text and the flat illustrations come off as afterthoughts. Still, though author Jankéliowitch leaves special terms like umbra and penumbra undefined, she does cover lunar basics (including comparisons with select moons orbiting other planets) in simple language. Similarly, if the human faces are White in all but one of illustrator Buxton’s scenes, her maps and diagrammatic views of the moon as it orbits between the sun and Earth are clean and easy to understand. As the final spread on the Apollo missions includes no mention of later developments, readers will come away uninformed of current plans for return visits, which is a shame. Still, after taking ganders at the huge planetary collision at the opening, the astronaut waving through the large clear plastic screen of an antique TV from the moon’s surface at the close, and the spectacular constructs in between, they may well be tempted into the orbit of Elaine Scott’s Our Moon (2016) to find out the full story.

Light on informational payload but a blast for display or demonstration.