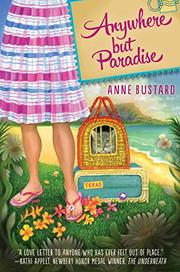 As far as Peggy Sue is concerned, Hawaii is no paradise.

The seventh-grader is already unhappy about moving from Texas to Hawaii in 1960, halfway through the year and with her cat, Howdy, stuck in quarantine for 120 days, when an eighth-grader at her new school calls her a “stupid haole” (white), warning that the last day of school is “Kill Haole Day.” Despite Peggy Sue’s efforts to make peace, the bullying continues. Learning how Queen Liliuokalani was deposed and her kingdom taken over by American businessmen helps Peggy Sue understand anti-haole sentiment, but it still hurts. Despite being befriended by Malina, a classmate whose mother teaches Peggy Sue’s hula class, Peggy Sue’s miserable—plus Howdy’s losing his fur and has stopped purring. How can she feel at home in a place where native Hawaiians are prejudiced against whites and devastating tsunamis take lives? By sewing outfits for the upcoming hula recital, she can earn airfare back to Texas. Hawaii born and raised, Bustard brings this early statehood era and its racial tensions to life effectively. However, Peggy Sue’s portrayal as indifferent to race distinctions and free of racial bias herself feels anachronistic at best for a white adolescent from Texas, where, in 1960, desegregation was vigorously opposed by whites and barely touched public institutions, schools and businesses. Why is only cruel Kiki a child of her time?

Despite concerns, this coming-of-age tale offers a vivid, accessible portrait of a fascinating time and place.