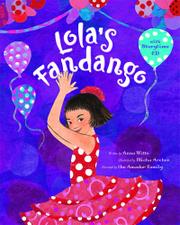 A young Latina girl emerges from her older sister’s shadow when her father secretly teaches her to dance the flamenco.

Lola envies everything about her older sister Clementina, from her name to her hair to her painting. While hiding in her parents’ closet one day, Lola finds her mother’s old dancing shoes. After Mami won’t divulge the shoes’ details, Lola goes to her father and discovers that her mother used to dance flamenco. Lola convinces Papi that she possesses the duende (attitude) necessary for dancing flamenco, and he agrees to teach her in secret. The two practice whenever they can, starting with rhythm and building to footwork. After their dancing feet disturb a downstairs neighbor, Lola and Papi move to the roof and continue the lessons. Papi decides to plan a surprise party for Mami’s approaching birthday party, where Lola can show off her skills. At the party, Papi saves Lola from a brief wardrobe crisis with a new dress. Lola dances for her Mami, who later joins the dance, suddenly and inexplicably attired in a flamenco dress. Readers may also be confused by the title (the word fandango never appears in the story, only in a note), as well as the shift from sibling jealousy to flamenco without return.

A passable effort with some high points.