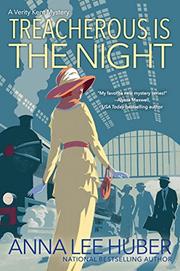 TREACHEROUS IS THE NIGHT

A marriage in jeopardy is tested by a make-or-break adventure.

After an agonizing 15 months when Verity Kent thought her husband, Sidney, had been killed on a World War I battlefield, she’s learned that he spent that time working undercover to expose traitors. Although their physical passion is alive and well, there is still a great deal of distrust between them over Sidney’s secrets and Verity’s war work with the Secret Service. Max Westfield, the Earle of Ryde, her fellow sleuth in a case that helped clear Sidney of treason (This Side of Murder, 2017), meets Verity at a séance to which he’s agreed to escort his aunt before they leave on one of the many morbid battlefield tours offered to those hoping to feel closer to those they lost. Verity, aware that many mediums prey on those who’ve lost loved ones, is still deeply disturbed when this medium conjures up Emilie, her wartime contact with a Belgian intelligence group. Verity, who doesn’t believe in spirits, is even more disturbed when the medium is killed in a suspicious fire. She tells Sidney she must put off the trip to the country that he’d hoped could resolve their problems and go to Belgium instead. Her former colleagues refuse to help even though it’s obvious that someone knows classified information and is using it for evil purposes. Although loath to return to the battlefields where he and his men suffered, Sidney joins Verity, who has for some time realized she’s being followed. Arriving at Emilie’s home, they find she’d left town after someone tried to burn down her cottage with her inside. A harrowing trip over devastated parts of Belgium and France puts them both in danger from someone who’s learned secrets he shouldn’t know.

Huber compellingly recalls the devastation wreaked on the minds of the people and the fabric of the countries involved. A thrilling mystery that supplies its gutsy heroine with plenty of angst-ridden romance.