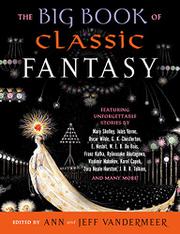 THE BIG BOOK OF CLASSIC FANTASY

The VanderMeers follow up The Big Book of Science Fiction (2016) with this counterpart anthology focusing on “classic” fantasy.

Ninety stories are selected to represent the roots of genre fantasy, from the 1800s to World War II. Familiar names such as J.R.R. Tolkien, Lord Dunsany, Robert E. Howard, and E. Nesbit are present, but so are authors not primarily remembered in literature as fantasists—Franz Kafka, Vladimir Nabokov, Herman Melville, Willa Cather, Zora Neale Hurston, W.E.B. Du Bois, and others. As in the SF anthology, stories never before translated into English have been included, such as Aleksandr Grin's “The Ratcatcher,” Der Nister's “At the Border,” and others. That said, the majority of the stories come from Europe or America—the few contributions from other parts of the world seem more a dash of seasoning to avoid homogeneity than indicative of a truly diverse spread. Some stories are more recognizable as fantasy to the modern reader, some less so (Paul Scheerbart's “Dance of the Comets” barely reads as a narrative; Melville's “The Tartarus of the Maids” contains nothing fantastical that could not be read as the narrator's own pitying-but-skewed perceptions; and Nikolai Gogol's “The Nose” is a cynical fable more absurdist than fantastic). Highlights include the wry observational humor of Stella Benson's “Magic Comes to a Committee,” the meticulous creepiness of Edogawa Ranpo's “The Man Traveling With the Brocade Portrait,” and G.K. Chesterton's unsettling “The Angry Street: A Bad Dream.” Like its SF counterpart, this dense and exhaustive collection would serve as an admirable survey course for the genre—though some stories feel included out of just such a didactic sensibility.

Dozens upon dozens of seminal fantasy stories, some well-known and others delightfully rescued from obscurity.