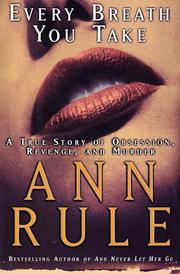 EVERY BREATH YOU TAKE

A True Story of Obsession, Revenge, and Murder

Bestselling true-crime specialist Rule (Bitter Harvest, 1998, etc.) certainly has her fans, but here her leering, hyperventilating style is merely distasteful. The story at its center is tragic. Sheila Bellush met handsome, slippery Allen Blackthorne, fell in love, and married him when she was much too young. Allen turned out to be trouble. He beat her, he cross-dressed, he ripped off her parents and everyone around him. Eventually, Sheila got away, but years later Allen tracked her down and had her murdered; he was caught, convicted, and went to jail. In between, Allen became a millionaire, Sheila had quadruplets, they both remarried, and everyone moved to San Antonio. Rule doesn’t omit a single tawdry detail; between the two of them, Allen and Sheila have so many dissipated relatives and face so many assorted disasters that it’s impossible to keep them all straight. Any sense of reality gets lost in this bloated, exaggerated, highly condescending retelling, which reads less like nonfiction than the script for a made-for-TV movie. Rule’s claim that Sheila’s sister sought her out and told her Sheila had wanted her to write about the case seems, to put it mildly, self-aggrandizing.