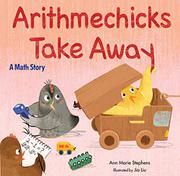 Together with the new mouse friend they met in Arithmechicks Add Up (2019), 10 diversely hued and patterned chicks respond to Mama’s “Time to hit the hay!” with a wild scramble to hide—first one, which leaves nine to go, then three more, leaving six, and so on in unpredictable groups until there are “0 chicks” (nor any mouse) to be seen. Then, just to change things up, no sooner does Mama find her chicks than a cry of “Again! Again!” touches off a second round of disappearances in different groupings. Each successive subtraction comes with an open-ended line, as in “10 chicks minus 1 chick equals…,” with the answer not immediately adjacent but visible on the facing page. To help readers arrive at solutions, Liu tucks into her cartoon pictures various strategies, including a traditional arithmetical equation, a “ten frame,” a number line, or even fingers (feathers); these are all summarized in small type in a closing section. Stephens uses alliteration and internal rhymes to set up a cozy rhythm, and she brings the brouhaha to an end with a final henhouse snuggle (Mouse gets a sleeping bag): “All found and winding down / with cuddles and bedtime books. / Stretching starts, yawns are next, / dreams are coming soon.” (This book was reviewed digitally with 9-by-18-inch double-page spreads viewed at 75% of actual size.)

Feathery fun for the newly numerate. Take it away, Arithmechicks!