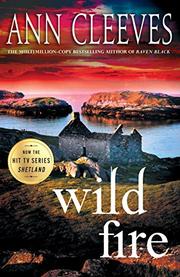 A long look into the dynamics of a troubled family is needed to solve several murders.

Inspector Jimmy Perez is intrigued when he gets a visit from Helena Fleming, a newcomer to the Shetland Isles who’s well-known as a designer of garments featuring Shetland wool. The local man from whom Helena and her husband had purchased their house hanged himself in the barn after he landed in dire financial straits, causing not only consternation but a certain resentment among the locals. Now Helena has received little images of gallows and hanged men written on bits of graph paper and is concerned about the effect they might have on her autistic son, Christopher, who’s already being taunted by some other children. Because his dead lover, Fran, was an artist and he helps care for her daughter, Jimmy is sympathetic to Helena’s plight. But it takes the discovery of Emma Shearer, a friend’s nanny who’s found dead in the Flemings’ barn, to kick the investigation into high gear. When Jimmy’s boss, Willow Reeves, arrives from the mainland and reveals that she’s pregnant by Jimmy, their fragile, complex relationship is shattered by his inability to come to terms with her news. Instead, he and his team focus on unearthing motives for Emma’s strangling. Emma had to deal with a boyfriend whose protective mother hated her, the not-totally-unwelcome attentions of Helena’s infatuated husband, and her problems with at least the two older Moncrieff children, whose welfare had been left almost entirely in her hands while their parents pursued their own interests. The deeper the detectives dig into Emma’s unfortunate past and those of their suspects, the more convoluted and difficult the case becomes.

Fans disappointed to see the last of Cleeves’ hero will be happy to know that the final case in this complex, character-driven series (Cold Earth, 2017, etc.) is a tour de force.