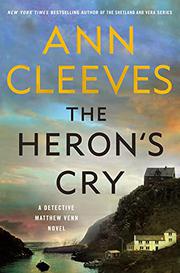 In her follow-up to The Long Call (2019), Cleeves provides a complex mystery full of surprises.

Detective Matthew Venn’s North Devon team is stretched to the limit by a series of homicides. An aborted conversation between police officer Jen Rafferty and Nigel Yeo, who wants to discuss a problem at a party thrown by a mutual friend, is the first hint of trouble. The next morning, Jen is called to a murder scene at an artist’s workshop on the grounds of wealthy Francis Ley's home. The dead man is Nigel, who was killed by a spear from one of his glass blower daughter Eve’s pieces. The investigation is complicated by several preexisting relationships. Jen had a one-night stand with Wes Curnow, the other artist in residence at Ley's, who also has studio space at an art center run by Venn’s artistic, upbeat husband, Jonathan. The murdered man worked for a watchdog organization that’s investigating the National Health Service after several families complained that their depressed youngsters got little help and committed suicide, including the son of a local family that could be seeking revenge. The homicide team, which in addition to Jen includes an ambitious detective named Ross, work in their own intuitive ways alongside Venn, a clever, soft-spoken, deeply conflicted man—he's still working on his fraught relationship with his mother after having been brought up in a cultlike religious group that doesn’t welcome gay people. A second murder with another shard of Eve’s glass widens the possible range of suspects, making it more difficult for the sleuths to ignore their personal feelings.

This character-driven exploration of people’s darkest flaws is a sterling example of Cleeves’ formidable talents.