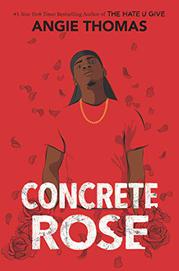 This literary DeLorean transports readers into the past, where they hope, dream, and struggle alongside beloved characters from Thomas’ The Hate U Give (2017).

The tale begins in 1998 Garden Heights, when Starr’s parents, Maverick and Lisa, are high school seniors in love and planning for the future. Thomas proves Game of Thrones–esque in her worldbuilding ability, deepening her landscape without sacrificing intimacy or heart. Garden Heights doesn’t contain dragons or sorcerers, but it’s nevertheless a kingdom under siege, and the contemporary pressures its royalty faces are graver for the realness that no magic spell can alleviate. Mav’s a prince whose family prospects are diminished due to his father’s federally mandated absence. He and his best friend, King, are “li’l homies,” lower in status and with everything to prove, especially after Mav becomes a father. In a world where masculinity and violence are inextricably linked to power, the boys’ very identities are tied to the fathers whose names they bear and with whose legacies they must contend. Mav laments, “I ain’t as hard as my pops, ain’t as street as my pops,” but measuring up to that legacy ends in jail or the grave. Worthy prequels make readers invest as though meeting characters for the first time; here they learn more about the intricate hierarchies and alliances within the King Lord gang and gain deeper insight into former ancillary characters, particularly Mav’s parents, King, and Iesha. Characters are Black.