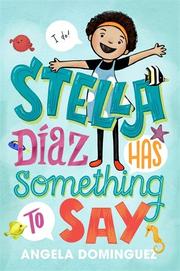 STELLA DÍAZ HAS SOMETHING TO SAY

From the Stella Díaz series, volume 1

Speaking up is hard when you’re shy, and it can be even harder if you’ve got two languages in your head.

Third-grader Estrella “Stella” Díaz, is a shy, Mexican-American girl who draws pictures and loves fish, and she lives in Chicago with her mother and older brother, Nick. Jenny, Stella’s best friend, isn’t in her class this year, and Stella feels lonely—especially when she sees that Vietnamese-American Jenny is making new friends. When a new student, Stanley Mason, arrives in her class, Stella introduces herself in Spanish to the white former Texan without realizing it and becomes embarrassed. Surely Stanley won’t want to befriend her after that—but he seems to anyway. Stella often confuses the pronunciation between English and Spanish sounds and takes speech classes. As an immigrant with a green card—a “legal alien,” according to her teacher—Stella feels that she doesn’t fully belong to either American culture or Mexican culture, and this is nicely reflected in her not being fully comfortable in either language, an experience familiar to many immigrant and first-generation children. This early-middle-grade book features italicized Spanish words and phrases with direct translations right after. There is a small subplot about bullying from Stella’s classmate, and readers will cheer as they see how, with the help of her friends and family, Stella overcomes her shyness and gives a presentation on Jacques Cousteau. Dominguez’s friendly black-and-white drawings grace most pages.

A nice and timely depiction of an immigrant child experience.