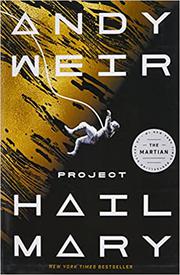 Weir’s latest is a page-turning interstellar thrill ride that follows a junior high school teacher–turned–reluctant astronaut at the center of a desperate mission to save humankind from a looming extinction event.

Ryland Grace was a once-promising molecular biologist who wrote a controversial academic paper contesting the assumption that life requires liquid water. Now disgraced, he works as a junior high science teacher in San Francisco. His previous theories, however, make him the perfect researcher for a multinational task force that's trying to understand how and why the sun is suddenly dimming at an alarming rate. A barely detectable line of light that rises from the sun’s north pole and curves toward Venus is inexplicably draining the star of power. According to scientists, an “instant ice age” is all but inevitable within a few decades. All the other stars in proximity to the sun seem to be suffering with the same affliction—except Tau Ceti. An unwilling last-minute replacement as part of a three-person mission heading to Tau Ceti in hopes of finding an answer, Ryland finds himself awakening from an induced coma on the spaceship with two dead crewmates and a spotty memory. With time running out for humankind, he discovers an alien spacecraft in the vicinity of his ship with a strange traveler on a similar quest. Although hard scientific speculation fuels the storyline, the real power lies in the many jaw-dropping plot twists, the relentless tension, and the extraordinary dynamic between Ryland and the alien (whom he nicknames Rocky because of its carapace of oxidized minerals and metallic alloy bones). Readers may find themselves consuming this emotionally intense and thematically profound novel in one stay-up-all-night-until-your-eyes-bleed sitting.

An unforgettable story of survival and the power of friendship—nothing short of a science-fiction masterwork.