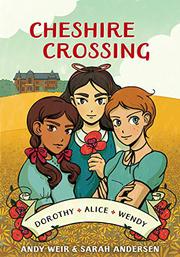 The action of this graphic fantasy takes place Second Star to the Right, straight on through the Looking Glass, in a place that is definitely not Kansas anymore!

Novelist Weir (yes, the Weir of The Martian fame) and cartoonist/illustrator Andersen’s deliciously funny debut team-up reunites the heroines from three of the Victorian era’s most memorable children’s books and sends them on a rollicking adventure. All teenagers, Wendy Darling, Dorothy Gale, and Alice Liddell are united at a special research facility where their parents send them to be educated. Under the tutelage of the enigmatic Dr. Rutherford and the ever watchful eye of a certain nanny who flies via umbrella, each girl discovers her powers and a sense of personal agency as they team up to free their respective fantasy lands from the combined menace of the Wicked Witch of the West and Capt. Hook. Each heroine emerges as a fully three-dimensional protagonist with a distinctive personality that enables her to feel both timeless and timely. The tart-tongued Alice is not averse to dropping the occasional “#%$@,” while tomboyish Wendy is as battle savvy as Peter ever was. Andersen’s delightful cartoon drawing style meshes perfectly with Weir’s prose, allowing the work to broaden its appeal beyond middle graders to young adults and adults. In the illustrations, Alice and Wendy both present white while Dorothy has brown skin.

A shrewd and spirited adaptation that will leave audiences hoping for another installment.