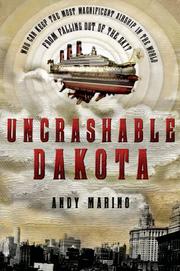 Air travel is reimagined in this sluggish alternative-history novel.

Like the Titanic that inspired it, the Wendell Dakota airship, powered by farting beetles whose gaseous emissions are powerful enough to rip trees from the ground, is said to be uncrashable. But on its maiden voyage in April 1912, mutinous sailors and a bizarre beetle-worshipping cult hijack the ship. Who is the mastermind behind the coup? Hollis Dakota, son of the ship’s deceased, famed designer, is determined to find out, along with apprentice beetle keeper Delia Cosgrove. But their investigation is hindered by Rob Castor, son of the ship’s chief operating officer, Jefferson Castor. Rob’s father is married to Hollis’ recently widowed mother, and when Hollis finds evidence that Jefferson Castor may have orchestrated the mutiny, he and Rob are at each other’s throats. Then the Dakota hits an invisible obstruction in the sky, and the battle lines disappear as everyone fights for survival. With such a crackerjack premise, this plot should rise like beetle gas. And certain parts do, like the flashbacks that detail Hollis’ grandfather’s discovery of the beetles’ talent during the American Civil War. But dense third-person prose that constantly telegraphs every character’s motivations slows the rest of the action to a crawl, and the story quickly sinks beneath its weight.