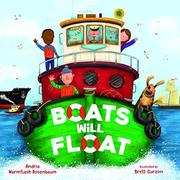 Many types of working and pleasure craft are depicted in this humorous, straightforward picture book.

Curzon’s vibrantly colored illustrations bubble with plenty of detail, enough to help children recognize different boat types they may encounter on a trip to the ocean or harbor. The storyline progresses more or less through the day in different marine locations, from early morning, when fishing boats are starting out and dragon boats are “flying by,” to a gentle nighttime sailing scene. The view changes as the boats change, cycling through rolling waves, a festive beach tableau, underwater scenes as studied by divers from a research vessel and the crew of a submarine before culminating in the family depicted in the opening illustration, going to bed in their houseboat. This family is white; the crews of the various boats include some people of color. Rosenbaum’s text consists of easy, rolling rhymes, with plenty of descriptive language to conjure up the scene: “Sunlight sizzles, hot and bright”; boats “rise and fall in liquid motion”; Salty breezes. / Seagulls squalling.” There’s plenty of engaging visual detail, including a spread in which the signal flag alphabet is shown and the flags on two boats spell out the book’s title.

A buoyant introduction to many different maritime pursuits.