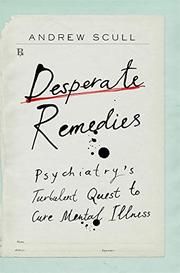 A comprehensive history of American psychiatry.

A longtime professor of sociology, Scull brings a lifetime of scholarship to bear on this authoritative and sobering book. Characteristically critical but nevertheless decently evenhanded, he tells the long story of usually failed efforts to deal with mental illness in the U.S. since the end of the Civil War. In the author’s telling, that reality seems to have brought out the worst in too many of those who thought they held the keys to ending the suffering of those with mental health disorders. Their approaches—among them asylums and then release to the streets with no further assistance; crackpot “medical” remedies like tooth-pulling and inoculation with malaria and insulin; lobotomies; electric shock treatment—were often repugnant and morally indefensible, and most of them applied disproportionately and involuntarily to women, the poor, and African Americans. Many “experts” who claimed to know how to treat the “baffling collection of disorders” that constitute mental illness were amateurs, scoundrels, and con artists who often talked about their patients as biologically degenerate and inferior. When, following Freud, more serious practitioners came on the scene, they also often acted in bad faith. Scull, who pulls no punches in his often muckraking account, can be accused of excessive harshness toward only a small number of his cast of characters; few deserve to emerge intact from his evidence-based lashings. Yet he also lays out the obstacles that all practitioners in the field have faced as successive methods of treatments—Freudian analysis, talk therapy, and medication—have come into vogue and then retreated. Most importantly, the author omits nothing related to his subject: Medicare and Medicaid, insurance companies, psychopharmacology, big pharma, financial and economic considerations, and, in a particularly brilliant section, the battle over diagnostic precision. Because Scull’s crisis-to-crisis history is so impeccable, it’s also deeply troubling.

A magisterial tale of the always frustrating yet sometimes well-intentioned efforts to aid desperate people.