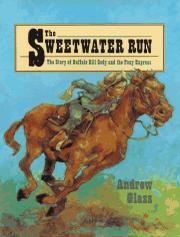 In a work subtitled ``The Story of Buffalo Bill Cody and the Pony Express,'' Glass (Folks Call Me Appleseed John, 1995, etc.) presents a well-researched, colorfully written, and dynamically illustrated fictional (some characters are invented, and historians are unsure whether Cody actually carried mail for the Pony Express) account of how 14-year-old Will Cody became the youngest rider, carrying the news of President Lincoln's election westward on a portion of the route along the North Platte and Sweetwater rivers in Wyoming Territory. The tale, told in the colloquial first-person narration of an older man reminiscing about the greatest adventure of his life, concludes with brief mentions of Cody's later exploits as Union Army scout, buffalo hunter, and showman. Scratch-textured oil paintings, with Glass's trademark purple shadows, are full of drama, rich color, and motion. He provides extensive notes; maps of the Pony Express route appear on the endpapers. This is a wonderful jumping-off point for further investigation of Cody's life and legend, the history of the Pony Express, westward expansion, Native American conflicts, decimation of the buffalo, or even California's teetering between the Union and the Confederacy before the Civil War. (Picture book. 7-11)